Congratulations to Antonia Wood, our November Tidy Kiwi Volunteer of the Month 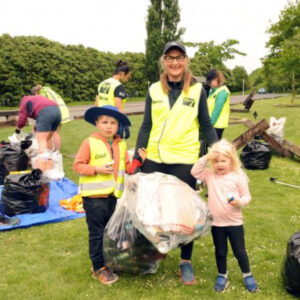 Antonia is a great advocate of the environment, working tirelessly with several Dunedin groups dedicated to keeping the community clean. As the founder of Plogging Ōtepoti Dunedin, she also regularly arranges clean ups including a recent one in the bush around Logan Park High School, which also involved Dunedin Orienteering, the Terra Nova Sea Scouts, Keep Dunedin Beautiful and Let’s Get Trashed. In just two hours, 35 volunteers collected 232 kg of litter from the area, 72kg of which was recycled.

Antonia started her efforts after organising a community clean up to pick up dog droppings along a popular walkway. The community really rallied around her efforts and she soon started doing more, including picking up litter when she was out on her daily run. This practise of jogging and litter collection is called ‘plogging’, and she’s since organised lots of events and has connected with other groups to double the efforts. She also brings her children William and Sophie along to clean ups, so they can understand the importance of keeping the environment clean from an early age.

Whakamihi – congratulations! As this month’s Tidy Kiwi Volunteer of the Month, Antonia will receive a Keep New Zealand Beautiful merchandise pack and a Resene paint voucher, to help her continue her beautification efforts in Dunedin.

Know someone keeping New Zealand beautiful? Simply nominate them on our website to become a Tidy Kiwi Volunteer of the Month – every winner also gets the opportunity to be recognised at our Beautiful Awards.

Moanataiari School in Thames recently completed a new edible and medicinal garden for their students, ...

Congratulations to Michael Barnes, our December Tidy Kiwi Volunteer of the Month

Congratulations to our final Tidy Kiwi Volunteer of the Month for 2022, Michael Barnes. Michael, aged 11, ...