Home / News / Half a century of Being a Tidy Kiwi

Half a century of Being a Tidy Kiwi 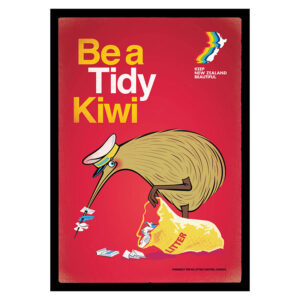 Keep New Zealand Beautiful was established as the Anti-Litter Council 55 years ago in 1967, with the governmental mandate of litter abatement. Their ‘Be a Tidy Kiwi’ campaign featuring our national icon picking up litter was first launched circa 1972. The image and the phrase has since become embedded in New Zealand’s DNA and the message continues to resonate with Kiwis even today. Artwork from early campaigns can be found in the Auckland War Memorial Museum and original badges have become a sought-after collector’s item.

Whilst Keep New Zealand Beautiful’s campaigns such as ‘Be a Tidy Kiwi’ continue to address Aotearoa’s litter problem, New Zealand’s economy and population has grown exponentially since, and so has the scale, scope and implications of the country’s waste problem.

“The environmental landscape has changed dramatically in the last five decades,” says Heather Saunderson, CEO. “As we enter the next 55 years, Keep New Zealand Beautiful is adapting to meet the challenges of the future by tackling the role of waste on a broader scale, not just litter. Today, the most critical challenges that waste poses to New Zealand and our people is climate change, biodiversity loss and pollution.”

Research undertaken by the charity, including our 2019 National Litter Audit and a Litter Behaviour Study in 2018, has helped spur the basis of a broader strategy and provided crucial baseline data on litter never before collected.

“This year Keep New Zealand Beautiful plans to celebrate our 55 year milestone through exciting new and refreshed programmes,” said Ms Saunderson. “2022 will see us partnering with like-minded organisations across the world such as Keep Scotland Beautiful and launching activations focusing on source-to-sea rubbish and pollution, community programmes empowering people to take climate action, and focusing on the role of education in bringing forward a more climate conscious generation.”

“In the spirit of being a Tidy Kiwi, we’re continuing work with community groups and government partners such as the Ministry for the Environment to gain solid and actionable environmental insights, for a better tomorrow for all New Zealanders.”

Congratulations to Manue Martinez, winner of our Tidy Kiwi Volunteer of the Month for April 2022

Congratulations to Manue Martinez, winner of our Tidy Kiwi Volunteer of the Month for April. ...

Congratulations to Luke McFarlane, our Tidy Kiwi Volunteer of the Month for March 2022

Congratulations to Luke McFarlane, winner of our Tidy Kiwi Volunteer of the Month for March. ...

It’s said that Kiwis are sadly well behind the world in recycling and resource ...