Mural by the sea paints a subtle environmental message

Corey was one of ten artists from across the country who took out the top prize in Keep New Zealand Beautiful’s Resene Nature Mural Competition 2022, to paint a mural with an environmental theme or message and to help beautify an area.

Corey crafted his design (shown below) to appeal to children with bright, colourful and easily-recognisable sea creatures, but with an overt environmental message that has the creatures swimming amongst pervasive pollution, wearing a mask and goggles to adapt and survive. Corey says, “The mural is aimed at a younger demographic in the hope that seeing the friendly sea creatures, which they can relate to from storybooks or cartoons, should also get the best opportunity to live and thrive in their own environment.”

“Older children and adults will more likely notice the subtle additions of rubbish dotted throughout the background, providing a reminder to be a bit more conscious about taking your rubbish away with you (especially plastic) from the beach. Once our leftover rubbish is claimed by the ocean it’s out of sight, out of mind — and easy to forget that the beach and ocean is a habitat shared by many.” 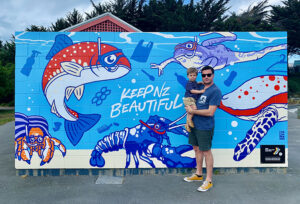 The park, located next to the Waimairi Surf Lifesaving Club, gets a lot of foot traffic and is a favourite place to play for Corey’s young son, Ashton. “It’s a real privilege for me to get to share a piece of my art publicly that Ashton and other children will hopefully get to enjoy for years to come. I felt it was the perfect place to drop a light and friendly environmental message.”

Corey’s process for choosing the right colours included illustrating his desired design digitally, and playing around with colour combinations on screen. He then matched the digital colours to the Resene palette, making final colour adjustments such as going a shade or two more vibrant than the colours on his printout, as Corey explains, “to ensure that the mural will be as bright and inviting as possible on the wall.” 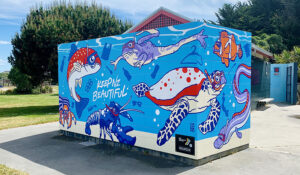 Check out the other winners of our Resene Nature Murals Competition here.

Moanataiari School in Thames recently completed a new edible and medicinal garden for their students, ...

Congratulations to Michael Barnes, our December Tidy Kiwi Volunteer of the Month

Congratulations to our final Tidy Kiwi Volunteer of the Month for 2022, Michael Barnes. Michael, aged 11, ...